What Patents Have to Do with Chocolate Chips 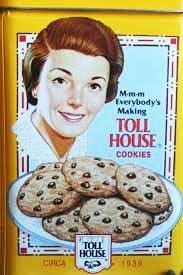 In the 1930s, Ruth Graves Wakefield was in her Toll House Inn in Whitman, Massachusetts when she made culinary history.

One story goes that Ruth ran out of baker’s chocolate when she was making her chocolate cookies. When she chopped up semi-sweet chocolate morsels she discovered they didn’t melt as she had expected.

Another legend says the fateful moment may have happened when a bar of Nestlé semisweet chocolate jittered off a high shelf, fell into an industrial mixer below, and shattered into her cookie dough. 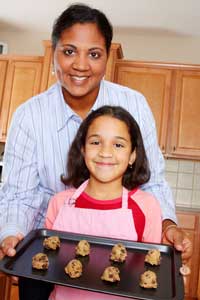 Regardless whether it was intentional or not, Ruth’s chocolate chip cookies were an instant classic. Today, 25% of all the cookies baked in the United States are chocolate chip. In fact, Ruth’s recipe has been printed on the back of Nestle chocolate chip bags since 1939.

The New York Times has even suggested Ruth be the first baker to be nominated for sainthood since she fulfills most of the requirements: (1) She’s dead. (2) She demonstrated heroic virtue. (3) Cults have been formed around her work. (4) Her invention is considered by many to be a miracle.

“If it was just a matter of a recipe,” said Hervé Poussot, a baker and an owner of Almondine, “we’d all be out of business. It’s what goes into the making of the cookie that makes the difference.” 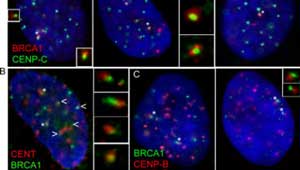 Just last month, our U.S. Supreme Court Justice Sonia Sotomayor seemed to have the same idea as Chef Poussot when she discussed baking chocolate chip cookies in the context of a legal case: Whether Myriad Genetics could have valid patents on certain human genes?
Myriad had painstakingly unraveled the 20,000 human genes that exist in a 6-foot long, coiled, compacted molecule to isolate the BRCA1 and BRCA2 genes. Myriad has patents on these genes, which show a significantly higher chance of developing breast or ovarian cancers. Isolating these genes lead to genetic tests, drugs, vaccines, and genetically modified crops. Myriad already has patents many of these related items. (As a brief side note – these are the genes Angelina Jolie recently brought to the headlines where she discussed the dramatic steps she’d taken to prevent breast cancer.)

Patents were created to protect new inventions for a limited time in exchange for public disclosure of the invention. Many inventions take years, and great financial resources to develop. Patents create economic incentives to invent, because it basically means someone cannot profit by simply mimicking your invention. A patent, however, cannot be claimed on a “product of nature.”

Justice Sotomayor made an analogy to baking chocolate chip cookies: “I can bake a chocolate chip cookie using natural ingredients: salt, flour, eggs, butter,” she said. “And if I [combine] those in some new way, I can get a patent on that. But I can’t imagine getting a patent simply on the basic items.” She directed her question to Myriad’s attorney: “So I put salt and flour, and that’s different? Now you can get a patent on the flour?”

“You haven’t created a type of gene that does not exist in the body,” added Justice Antonin Scalia.

While the Supreme Court may hold that isolated DNA cannot be patented, they were also concerned about the broader implications: Justice Kagan asked what incentives a company like Myriad would have to make the very substantial investment (in this case, approximately $500 million before breaking even) to isolate the gene in the first place.