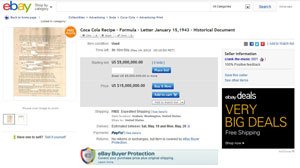 You Probably Won’t Find Trade Secrets at an Estate Sale

Recently, Cliff Kluge, a Georgia antiques dealer, claimed to have found the secret recipe to Coca-Cola. He found the “secret formula” in an old box of papers from an estate sale of a Georgia chemist. The document is dated 1943, but the secret formula was created in 1886 (see my prior post on how crafty lawyers whose contract for bottled Coke kept the price at 5 cents for 70 years.)

Mr. Kluge had the alleged recipe on ebay with the minimum bid of $5 million. For anyone who didn’t want to risk being outbid he added the “buy it now” option of $15 million.

At least once a year, someone claims to have the original recipe for Coke and attempts to “sell it back” to the Coca-Cola company. Even today, this “Holy Grail of soda pop” is one of the most sought after trade secrets in the world. NPR learned just how many people wanted to see it back in 2011. When they claimed to have the original formula posted on their website their site was flooded with so many visitors that it crashed. 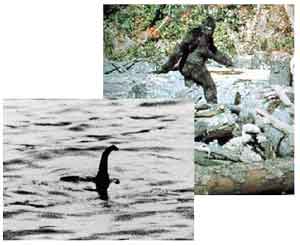 Coca-Cola says its super-secret formula is a heavily guarded (both figuratively and literally) trade secret. It resides in a vaulted safe at Coke’s headquarters. Company officials have stated that stumbling across a copy of the original secret recipe is akin to finding the Loch Ness Monster or Big Foot: “It’s just not going to happen.”

So what exactly is a “Trade Secret”?

On May 2, 2013, Texas became the 48th state to adopt the model Uniform Trade Secrets Act (UTSA). Only New York and Massechuttes have not yet adopted the UTSA. The Texas Uniform Trade Secret Act takes effect on September 1, 2013 and replaces existing Texas common law governing trade secrets. The Texas UTSA is substantially similar to the model UTSA, although its definition of trade secrets is slightly broader:

A “trade secret” means information, including a formula, pattern, compilation, program, device, method, technique, process, financial data, or list of actual or potential customers or suppliers, that:
(A) derives independent economic value, actual or potential, from not being generally known to, and not being readily ascertainable by proper means by, other persons who can obtain economic value from its disclosure or use; and
(B) is the subject of efforts that are reasonable under the circumstances to maintain its secrecy.

The Texas UTSA, like the model UTSA itself, prohibits the unauthorized acquisition, disclosure and use of a trade secret.
Interestingly, however, the Texas UTSA allows authorized reverse engineering.

Do you have, or want to protect, your company’s trade secrets? Contact us for a customized employee contract or independent contractor’s agreement or visit with us on July 1st for our free presentation “Money and Contracts”at Monday Night Marketing. Click here to RSVP.