Nutmeg, the iPhone of the 1600’s, Is Still Making Law Today 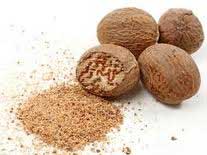 While You’re Searching for the “Must Have” Gift . . .Have You Considered Nutmeg?

Nutmeg is the spice of the holiday season. We taste it in our spinach, sprinkle it on top of our eggnog, and its unique aroma fills the house when we use it in our baked goods. Nutmeg was actually considered a feel-good medicine (potent enough to induce hallucinations) long before it was a cooking favor.

In Europe, nutmeg was the spice of the upper class. It was exotic, expensive, and having it on your table was a sign of wealth. It was the “must have” for the well to do families of the 1600’s. At one point, nutmeg was so prized that it was sold at a 6000% mark-up. (To put it in perspective, that $10 tub of popcorn at the movie theatres is only marked up an average of 1300%)

The demand for nutmeg was so high that culinary historian Michael Krondl named nutmeg the “iPhone of the 1600’s.” During the craze to aquire nutmeg, the Dutch and the English were fighting for control of the spice trade. It ultimately led to a treaty where the Dutch traded Manhattan for the small island of Run (in the Banda Islands) to control the nutmeg trade.

The fighting over nutmeg didn’t end in the 1600’s. We’ve just hit the anniversary of another nutmeg battle. This one was a legal dispute involving ediblenutmeg.com. On December 8, 2011, the National Arbitration Forum ruled Edible Nutmeg a/k/a Edible Communities had the rights to similar domain names, partially because of its rights to EdibleNutmeg.com.

While domain names have the technical function of getting us where we want to go on the Internet and to our email addresses, domain names also have an important function in our business world because they’re closely related to our products or services.

Edible Nutmeg is a provider of various goods and services, including magazines and newsletters featuring: tourism, culinary and agriculture industries, local growers, food retailers, chefs, and food artisans. They own a family of EDIBLE trademarks including:

While the battles over nutmeg go back centuries, this type of domain name dispute is a relatively new area of the law. Want to know more? Dodge Legal Group, PC offers a Domain Name Audit and Review for a flat fee. Contact us for more information.